Daddy Series: Why is my pregnant wife so cranky?

I did a survey on men, asked what they would like to know when their patners are pregnant or things they wished they had known when their partners were pregnant, something common to all of them was the mood swings so I decided to shed some light on it. 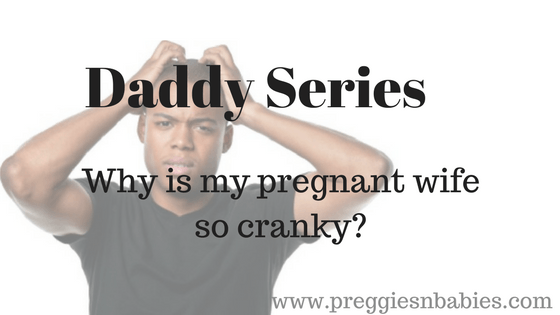 As a dad-to-be, one of the things you would experience during pregnancy is your partner’s constantly changing mood. So there is a couple who had lots of

misunderstandings during pregnancy and were at the point of separating, the man always complained of his wife being cranky and confusing him he never knew what she wanted and when she did want something she wanted them at the most ridiculous times of the day.

One day she perceived the odor of the soup her neighbor was cooking and that was the soup she wanted, she had never had the soup before but the aroma was enough for her to want it, in order to satisfy her he ordered about two weeks worth of supply of the soup from the woman. Guess what? After the third time, she was no longer interested in the soup, they kept having misunderstandings, he is a busy person and always exhausted from work he felt she wasn’t being considerate of him considering the fact that he was working to make ends meet.

This misunderstanding lingered for a while, one day he went with her to the clinic and the doctor wanted to see them both he refused to see the doctor with her and  the doctor should see her alone and he wasn’t interested in what was wrong or going on with her, the doctor being a professional sensed a problem and eventually made him talk and the problem was solved, the doctor explained what was happening and he had a better understanding and his statement was nobody ever told him something like this was going to happen and the woman wasn’t in the best position to explain because even she sometimes is unaware of what she is doing.

I could understand where he was coming from and I told him the next pregnancy it might still happen again, so his mind is well prepared on that.  As a dad-to-be you should understand first that her mood would be constantly changing so you have to be patient with your partner and be understanding and work with her mood, she is very much as anxious about the baby as you are, so try to work with her mood.

Why is she having constant mood changes?

Mood changes in the mother occur due to the changing hormone levels in the body and it also continues after birth due to a drop in pregnancy hormones(progesterone) and a rise in the post birth hormones(prolactin and oxytocin). You also need to know that you would also be experiencing some mood changes and having changing hormone levels, you would be anxious about the baby coming and wonder what you are supposed to do and what kind of father you would be, it is all normal.

I want you to know that you and your partner would be fine, whenever you are feeling anxious express yourself to her and talk about it, the truth is you are both anxious and you both want to be strong for each other especially you as the father-to-be you want to be strong for her, it is totally fine but sometimes try to express your anxiety to her it would help you a lot.

I hope this has been helpful.