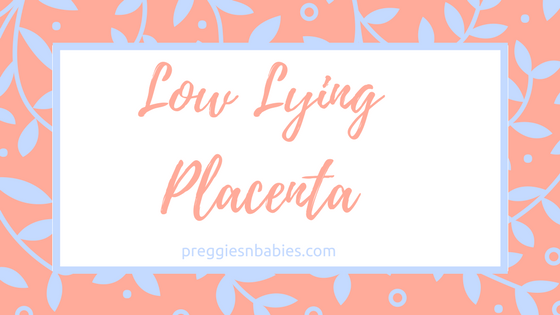 I want to share a story of Low lying placenta, you know those stories you hear of how women are told to go for a cesarean section and then they don’t know why then end up with the wrong person and it goes bad? no, this story doesn’t go bad but

before I share my story I would shed some light on low lying placenta also known as Placenta Previa.

The placenta is a round organ in the uterus that supplies nutrients, oxygen to the fetus from the mother and also the removal of toxic waste from the fetus and all this is done through the umbilical cord in Yoruba its called Ebi Omo, the placenta is usually located in the fundus which is the uppermost part of the uterus.

When the placenta is found to be so low that it covers the cervix partially or totally it is known to be Low lying placenta. The stretching and dilatation of the lower uterine segment (lower part of the uterus) during the later weeks of pregnancy cause premature separation of the placenta and subsequent bleeding.
Mrs. Gboyega(not real name) a 37-year-old woman who was 30weeks pregnant, has two lovely children 6years and 3 years old. Her previous pregnancies were through vaginal deliveries with no complications during each of the pregnancies. She was at home one day when she noticed that she was bleeding with no pain she thought to wait and notice if the bleeding continued as it was a light form of bleeding. The bleeding continued and she became worried lucky for her the next week was her antenatal visit, she complained about the bleeding she noticed a week before, the midwife requested she had an ultrasound done immediately. The results of the ultrasound confirmed the suspicions of the midwife placenta praevia was confirmed, she was referred to the Obstetrician for further care.

How to detect Low Lying Placenta

It is usually detected first by the mother when she experiences painless bleeding. it is then confirmed by the doctor through further testing.

– Having at least one child.
– Large Placenta.
– Position of the fetus in the womb.
– Abnormally shaped uterus.
– Being older than 35years.

The aim of management is to control the bleeding and keep the mother and baby alive to prevent the death of both due to excessive blood loss. Management is dependent on the age of the fetus, the type of placenta previa and amount of blood loss.
Conservative treatment: this is done when patients bleeding is slight and the gestational age is less than 36 weeks, the aim of this treatment is to prolong pregnancy for as long as possible to prevent prematurity of the baby. The mother is usually admitted and monitored closely.
Active treatment: this is done when bleeding is severe, a cesarean section is done to keep mother and baby alive.

Mrs. Gboyega was not familiar with this condition and began to worry if her baby was well and healthy, she also worried and wondered what would have caused her to have a low lying placenta since her two previous pregnancies were complication free. She was educated on it and she got to know some of the risk factors of low lying placenta such as having at least one child, large placenta, the position of the fetus in the womb, abnormally shaped uterus, being older than 35years.

She was further encouraged to have enough bed rest and stand only when absolutely necessary, she was advised to avoid sex and exercise to prevent bleeding if she got tired of staying in bed she could carry out minimal tasks that would not cause any form of stress or strain on her. She was however advised to call the midwife or her doctor immediately she noticed any form of painless bleeding no matter how little.
She was mentally prepared for a cesarean section as a vaginal delivery would cause a lot of complication and increase the chances of bleeding, she accepted as she didn’t want to cause any harm to herself or her baby, she was however encouraged to pray if she got scared and in order for her to have hope, the support of her family and friends were solicited. At 38 weeks she was scheduled for an elective cesarean section, she came out hale and healthy as well as her baby. She thanked the midwives and doctors for the support as she wouldn’t have been able to remain calm without them and her family.88 Eventually she found out she had a large placenta which was the cause of her having a low lying placenta. She had no hemorrhage or further complications and she was doing perfectly fine.