What Nigerian women should know about gestational diabetes. 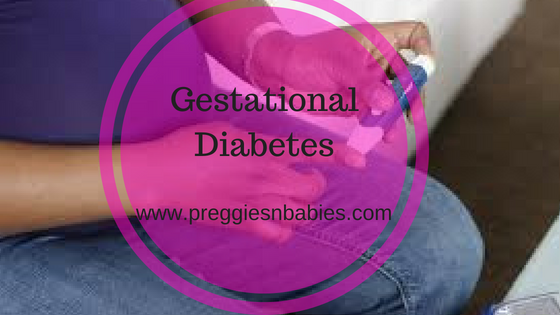 Diabetes is a condition in which there is a high level of glucose (sugar) in the blood. Gestational diabetes, however, is when diabetes occurs as a result of pregnancy and it usually disappears after pregnancy. It can occur anytime during pregnancy.

There is no known cause of gestational diabetes, however; the placenta releases hormones which disturbs the work of insulin in the body of the mother. This makes it difficult for the body to use insulin this is called

insulin resistance. Gestational diabetes occurs when the body is unable to use insulin needed during pregnancy.

How Diabetes Mellitus occurs during pregnancy

During pregnancy, the breakdown of carbohydrate is affected early in pregnancy by a rise in serum levels of estrogen, progesterone and other hormones.

What occurs with its metabolism is, due to the increased breakdown of glucose in the body in order to adequately feed the baby, the maternal hormones also secrete more insulin to help in ensuring normal blood sugar levels. The placenta, however, secretes hormones such as prolactin, human placental lactogen, cortisol(an adrenal hormone) and glycogen to cause the body to resist to the uptake of insulin to ensure a sustained supply of glucose for the Fetus. The glucose is transported across the placenta to the fetus, who uses it as a major source of fuel. Maternal amino acids are also actively transported to the fetus through the placenta. These amino acids are used for protein synthesis and as a source of energy. In addition to ensuring that glucose is available for the fetus, the increased maternal insulin resistance means that the pregnant woman has less glucose to meet her own needs. This causes a breakdown in fats of the pregnant woman, which may result in the presence of ketones in urine( this is why urine test is done routinely during antenatal visits).

The delicate balance of glucose production and use is stressed by the growing fetus. The stress is referred to as the Diabetogenic effect of pregnancy. Thus any preexisting disruption in carbohydrate metabolism is augmented by pregnancy, and any diabetic potential may precipitate gestational diabetes mellitus.

There are three main categories:

Gestational Diabetes Mellitus is defined as carbohydrate intolerance of variable severity with onset or first recognition during pregnancy.

Influence of Diabetes on Pregnancy

The pregnancy of a woman who has diabetes carries a higher risk of complications, especially perinatal mortality and congenital anomalies.

Some of the complications include:

In most cases, there are no symptoms, when there is, however, there are signs such as excessive eating, excessive thirst, frequent urination or fatigue. This is why it is important not to miss antenatal visits. if you do suspect any of theses symptoms and it is not time for your antenatal visit you should call or reach out to your midwife or doctor.

How Can I detect Gestational Diabetes?

Gestational diabetes usually occurs by the second trimester of pregnancy. it usually is detected by the midwife or health worker during antenatal visits. This is why it is required to produce urine during every antenatal visit.

Gestational diabetes is not preventable it can, however, be managed. It resolves after the birth of the baby, it should be noted that the presence of gestational diabetes is a risk factor for diabetes in the next 10 years. It important to follow instructions given by the doctor and have health checks regularly. During pregnancy the care given will be based on: